Instead of positioning them all separately, you can also insert furniture and objects in a line arrangement.

With the starting and ending point of the line arrangement you can then also edit the number, the arrangement and the alignment of the objects.

There are different options for positioning objects:

• with "drag & drop", simply pull the object to the desired position.

• draw a rectangular arrangement, mark the area into which the objects should be inserted. The number, the arrangment and the alignment can be edited after marking the area.

• draw a polygonal arrangement, as for a rectangular arrangement. You can mark the area in which the objects should be placed. However, here, instead of four points, you have as many points available as you require.

• circular arrangement: by clicking onto the drawing you define the central point of the arrangement, then you pull the mouse as far back as necessary until the circle has the desired dimension. The objects are placed on the diameter, the number of objects and the radius of the circle can still be edited. 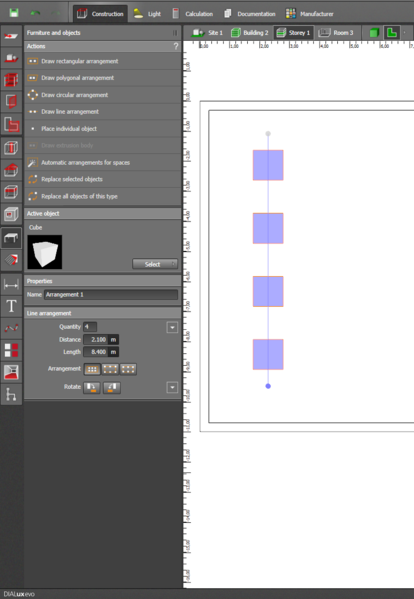 Exchanging selected / all objects of one type

This function allows you to exchange several objects at one time. If, for example, you have placed an office chair in each of the rooms in your project, by using the function "Exchange all objects of the same type" you can replace one chair by another.
If you wish to exchange the chairs in one specific room only, then you mark the chairs und use the function "Exchange selected objects". 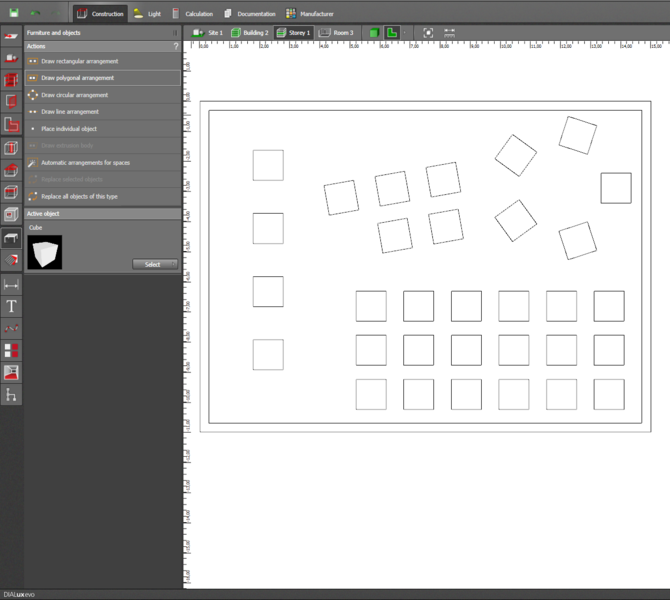 In DIALux evo, as in DIALux 4, there are standard objects and an object catalogue which can be started in "Furniture and object tool" in the design mode.
Objects/furniture can be added to the DIALux evo database either via "drag & drop" directly into the project or by clicking on "Adopt".
By clicking on an object you can add this to your 'Favourites'.
The objects used in your project are found at the top of the list. In addition the number of each object occurring in the project is displayed.